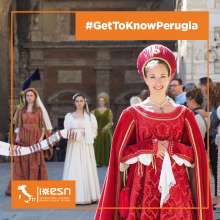 Perugia 1416 is based on the participation of the five districts of the city and aims to promote the contribution of the population with a project which has precise purposes of social gathering, cultural and economic promotion, and the exploitation of the city.

The non-profit association “Perugia 1416", a transition between the Middle Ages and the Renaissance”, or more briefly “Perugia 1416”, was created in March 2016 by twenty-two founding partners. Among these there are the Municipality of Perugia, which leads the list, the University of Perugia, the University for Foreigners of Perugia, the Academy of Fine Arts, the Music Conservatory, the Culinary School and many other cultural and territorial associations, together with private associations. This association aims to the pursuit of each initiative useful to the cultural and artistic qualification of the community of the city of Perugia, through the ideation, the organization and the management of commemorative reenactments of facts, events and periods which belong to the historical heritage and their distribution on national and international territory. In particular, the association organizes and promotes with the Municipality of Perugia the event called “Perugia 1416”.

Perugia 1416 was born from the curiosity of re-discover, symbolically, a very fruitful period of our history, to arouse curiosity, knowledge and to share such knowledge: the pleasure of being together in a project which aims to involve the city during the whole year, and culminates with the popular celebration on the second weekend of June.

One of the greatest age of the thousands-of-years-old history of Perugia lies between the Middle Ages and the Renaissance, when the image of a new society rises in all Europe as a model of orderly social development, economical fervor, and an extraordinary artistic and cultural impulse.

In 2016 took place the first edition of “Perugia 1416”, on the 6th centenary of the beginning of the lordship of Braccio Fortebraccio da Montone on the city of Perugia, to remember and celebrate the moment of transition and deep changes between the 14th and 15th Century, and by focusing the reenactment on the figure of Braccio, a great and complex protagonist of the history of the city. The following year took place the 2017 edition and now the program of the 2018 edition is available.

History remembers that the keys and the government of the city were given to the leader after the victory of the war of Sant'Egidio, fought on 12th July 1416. With this war the popular faction of the Raspanti was definitely defeated, and the party of the Beccherini, represented by noblemen who left Perugia, returned in the city under the wishes of a peacemaker Braccio. After the arrival of Braccio, the violent fights between factions, which characterized a long period of the Medieval commune, finally stopped, and so began a lordship which brought order in a city oppressed by the debts, gripped by insecurity and the misrule, through moderate and respectful reforms of the municipal statute. Provided that “the invincible” was the most famous leader and strategist of his time, Braccio was also inspired by a political dream, which saw Perugia capital of a Regnum Italicum, of an italian domination, free from the temporary power of Rome.

The administrative commitment of Braccio, first and last lord of the city, will leave inside the city walls and in most of the territory clear evidences of his presence, such as the lord mansion between the cathedral and the bishop's palace, the stabilization of the Piazza del Sopramuro, thanks to the weirs that still take his name, and the reclamation of the lake Trasimeno through hydraulic engineering works still noticeable.

A lordship that can be measured on its quality: from time to time his tracks come back to memory and on the cultural heritage of Perugia, without forgetting the popular support always by his side, due to his great capacity to dialogue with the citizens of every class and to understand and satisfy their needs.